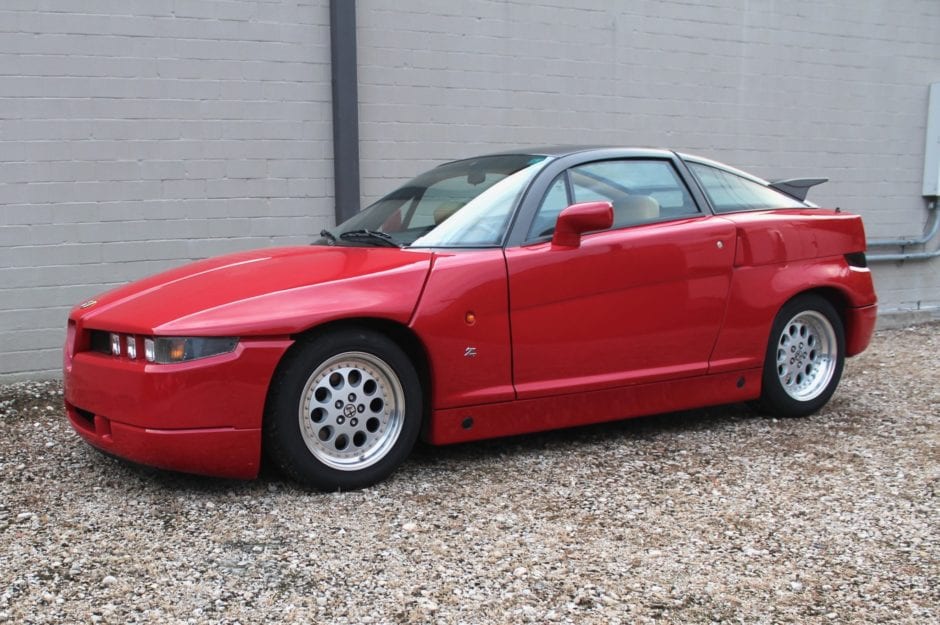 By Philip Richter on November 26, 2019 in Auction Spotlight

The Alfa Romeo SZ is a unique car. Enthusiasts either love its Zagato styling or they hate it. Either way, its certainly an unusual car. We are seeing more of these cars being imported into the United States as they are now almost thirty years old and can legally be brought into the United States. This example is one of 1,036 examples produced from 1989 to 1991 and was originally owned in Italy. The car wears the only available color scheme for an SZ, red over tan, and is powered by a 3.0-liter V6 paired with a rear-mounted five-speed manual transaxle. The current owner imported the car to the US in 2015 after acquiring it from a dealership in the Netherlands. A subsequent service performed in August 2015 included replacement of the timing belt, water pump, and tires, as well as fuel system cleaning and flushing the brakes and power steering. This Alfa SZ now shows just 3,150 kilometers (~2k miles) and was offered by the seller on behalf of the current owner with Italian documents, records from current ownership, a service manual, a clean Carfax report, and a clean Texas title.

Of the six SZ’s that have been listed on BAT over the last two years, only one has sold. The market is not quite there yet on these unusual cars. This example appeared to have many of the boxes checked: Low mileage and documented owner provenance. However, at present, the collector market remains soft. With only just over 1,000 produced and Zagato styling, one would think these are poised to move in the near future. While they do suffer from build quality during a dark period for Alfa, the SZ is a car to watch in the coming years.

Philip Richter is President and co-founder of New-York-City-based Hollow Brook Wealth Management, LLC. The Turtle Garage Blog, he says, is dedicated to his "love of excessive personal transportation."
View all posts by Philip Richter →
2007 BMW E60 M5: A Lesson in Depreciation
The 2019 Turtle Invitational: Raising the Bar!