By Philip Richter on July 16, 2016 in Cars, Collections, Reviews

This week I logged some wonderful miles behind the wheel of my 1990 Mazda Miata. This car occupies a special place in modern automotive history because back in 1990 it revolutionized the once dormant sports car market. The first-generation Miata was introduced in the fall of 1989. It was my sophomore year of college and I recall the Miata’s arrival causing a sensation among young students across campus. It’s launch heralded a period of change in the automobile industry and its arrival coincided with the fall of the Berlin Wall.  Like thousands of East Germans pouring into West Berlin, the introduction of the Miata set many car enthusiasts free.

After twenty lackluster years of pollution controls and Ralph Nader’s safety regulations, America was ripe for an automotive Renaissance. With blah designs from Detroit and less than a handful of convertibles available in the U.S. market, the Miata answered the prayers of car enthusiasts young and old alike. It redefined affordable open two-seater. The Miata single handedly brought the roadster back to America. Road & Track recently did an excellent 25th anniversary retrospective on the immortal Miata and you can read that article here. Unlike its British MG and Triumph forefathers, this car was reliable, tight, quick, and very well engineered.

My car is a very early production example that was manufactured in January of 1990. It was owned by a fanatic who paid up and got in line early and received the new Miata in time for spring. He never left it out in the rain. Over the last twenty six years the car has travelled only 18,000 careful miles. It has had no paintwork and has a full and regular dealer service history. This Miata is so clean and original that you could eat caviar off the undercarriage. It has to be one of the best first-year Miata examples left on the planet.

Driving the car around the Connecticut twisty roads reminded me of the old adage, “it’s more fun to drive a slow car fast, than a fast car slowly.” But the Miata is not slow or underpowered for its size and weight. I find its power to weight ratio optimal. The car is so well balanced. While it lacks the endless turbine power of a Mercedes V12, the little four banger is no slouch and it loves to rev. The Miata’s engineers spent hours “tuning” the exhaust system for the right notes. The result is a sound that is throaty but not obnoxious.

The first-generation Miata is nimble, responsive, light and is not afraid of being driven hard. Yesterday the mercury hit 92 degrees and I flipped on the A/C. Within seconds ice cold air came from the twenty-six-year-old vents. My Miata’s A/C system has not been serviced in years. I wish our new BMW X5 had A/C this strong! The car feels so modern despite its twenty-six years of age. Driving over rough roads the body is rigid and tight. There is virtually no detectable windshield wobble that often plagues many modern and vintage convertibles. Reliable and simple, the Miata is a no-frills machine where every piece has a place and a purpose. There is nothing unnecessary or superfluous onboard the Miata. The roll up windows harken back to a mechanical age. The windows in the Miata are geared just right so a small crank sends them up in a jiffy.

Looking outward from the cockpit the Miata resembles a bare bones mass-market Ferrari P330. The great view outward from the cockpit is yet another example of the Miata’s attention to detail. The vista from the drivers seat is a small sea of sculpted curves. The middle of the hood has a slight bulge and it tapers gently downward into a valley and then slopes upward on each side. The effect creates an optical wing-like sensation over the wheel wells. The interior ergonomics of the Miata are fantastic. The gauges are all perfectly placed and the speedometer and tachometer are large but not oversized. The vents all are placed just right. The narrow center console separates driver and passenger. The driving position is excellent and the pillow-like seats are comfortable and very supportive. The Miata sits low-slung like a Lambo and  your feet hit the pavement immediately upon exiting the car. 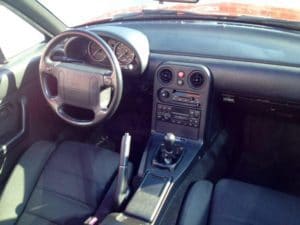 The fun factor of an early Miata cannot be beat at any price. I drove the car over 200 miles and it seemed to have sipped only a few ounces of regular unleaded. The fuel gauge didn’t budge much despite some hard driving and high revving miles. In the garage my Miata lives sandwiched between a 911 and SL 65 AMG Black Series. My garage is mostly occupied with German cars and motorcycles but the Japanese Miata is still somehow very much at home. Maybe its because the name Miata translates from the old German word “reward.”  If the truth be told, the 300 to 700 horsepower German beasts that flank its left and right side lack some of the basic and crucial attributes of the pure, simple and fun Miata.  Dare I say Mazda built the perfect sports car at any price? 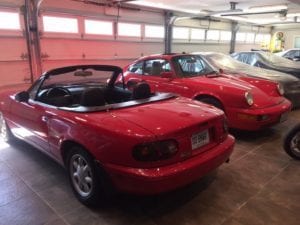 My Miata at the Turtle Garage nestled between a Porsche and a Benz (where it belongs!) 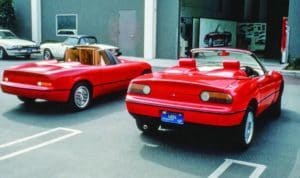 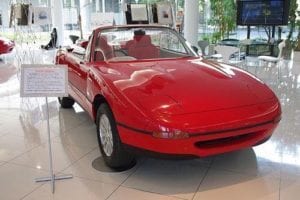 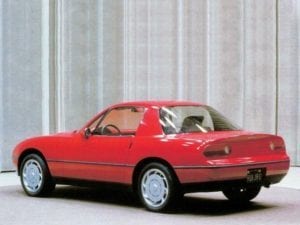 Early iteration of a Miata 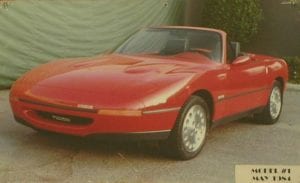