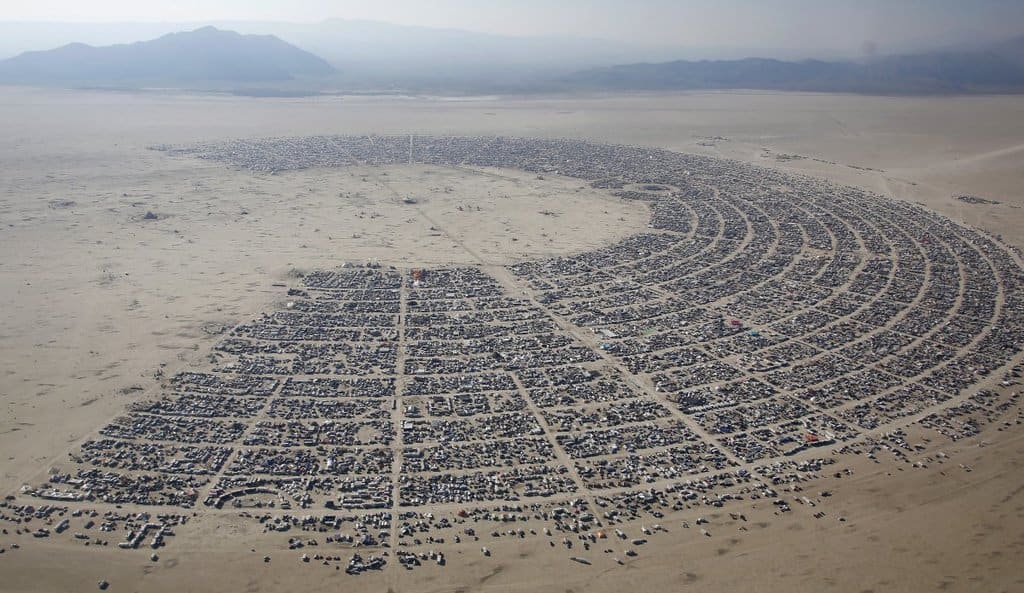 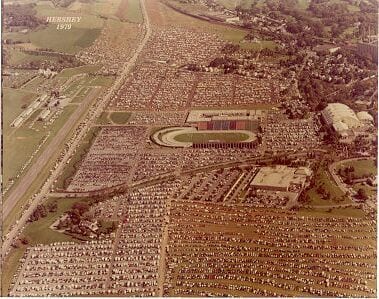 On Friday I made my annual pilgrimage to Hershey Pennsylvania for what I fondly call the “Burning Man” of car shows. The annual AACA fall meet in Hershey has been held since the Early Cretaceous Period (in the collector car timeline that means 1955). For car enthusiasts, Hershey is Mecca. Each October thousands of automobile enthusiasts descend on the Town of Chocolate in search of enlightenment.

The Hershey AACA website sums up the annual show which is now in its 60th year:

It consists of over 9,000 flea market spaces, over 1,000 car corral spaces, and approximately 1,500 show cars. Each year the show attracts visitors from all over the United States and many countries throughout the world. Some of the most unusual cars and parts can be found at Hershey. If you love antique cars, Hershey is the place to be.

I arrived on Friday afternoon just as an enormous electrical storm was ravaging the show field. Ominous dark purple clouds lowered themselves over the venue like a puffy tarpaulin. Some people were running for cover but most were running to cover their cars. The wind was powerful and it tossed leaves in a circular tornado-like motion. The main thoroughfare in town runs adjacent to the show’s venue at Hershey Park. My timing was not optimum as traffic was stalled everywhere. After an hour at a virtual standstill I finally made it to the Hershey Lodge. I ditched the car, checked into my room, and headed directly to the ballroom for the auction.

Rob Myers at RM Auctions hooked me up with a room at the Hershey Lodge. Securing a room for only one night during the auction weekend is not easy (the Hershey Lodge has a minimal multi-day stay policy during the show). RM Auctions also gave me complimentary auction passes and several cocktail vouchers. Last year I worked closely with RM to help facilitate the sale of the Malcolm S. Pray Jr. collection at Amelia Island. Since then, I’ve stayed in touch with Rob and his team. Rob and I toured the inventory at the pre-auction tent and he gave me an industry update. From humble beginnings, Rob built a global empire and RM Auctions now dominates the high-end collector car auction business. His success has not gone unnoticed. Rob recently sold a portion of his company to Sotheby’s.

I found myself a seat and watched the entire auction. I soaked in the camaraderie and diversity. I even threw back a few complimentary beers. Seated next to me was a well-heeled Brit who had flown in from London. He had clearly had done his homework on several of the cars being offered. His Downton Abbey-esque appearance implied that his Lordship had a large enough balance sheet to transact. He attempted a few bids but was always outgunned by other high rollers. Then there was the inebriated trio behind us: three drunk guys in tank tops and gold chains providing loud, expletive-filled commentary in their Jersey-shore-type accents. Naturally, his Lordship found their behavior “ghastly.” This is the beauty of Hershey: the different worlds of car lovers colliding.

I watched the evening’s bidding and buying with wonder, awe, and fascination. Cars that only a few years ago were inexpensive bargains are now fetching real money. Stratospheric sales of Ferraris, Pierce-Arrows, and muscle cars are causing the whole market to rise. The meteoric surge in collector car prices is, in my mind, closely correlated with the Federal Reserve’s response to the 2008 financial crisis. Quantitative Easing (i.e., money printing and negative real interest rates) has inflated Andy Warhol paintings and rare automobiles in much the same way. Certain MG’s, Triumph’s, Austin Healey’s, and Sunbeams are now unaffordable to the average Joe. Rare cars are not the only vehicles seeing a stark increase in value. Several mass-produced cars like the late 1980’s R107 Mercedes SL are now rising in value. I’ll go on record to say that the entire collector car market feels frothy and could be nearing a top. One sign of the market taking a pause is the fact that the ever-rising 1955-62 Mercedes 300 SL’s are finally leveling off and in some cases coming down.

Hershey is not Pebble Beach or Amelia Island because it is a more inclusive event that people from all social and economic backgrounds can enjoy. Hershey is actually more like the infamous Burning Man desert gathering. As at Burning Man, there are RV’s parked everywhere at Hershey Park. There are so many vendor booths at the show that three days is not nearly enough time to visit half of them. Like the endless Prado Museum in Madrid, you almost need a few weeks to properly see everything at Hershey.

Unfortunately, this year I did not have time to walk the fields or visit the infamous Car Corral. The Car Corral is a huge parking lot full of old cars for sale (most of them driven to the show by their owners). The Car Corral tradition is a display of metal like no other and is a Hershey favorite. There is one well-known guy who drives a car to the Corral each year and sells it and drives home with a new one. Keeping his driving experience diverse, he literally rotates his cars annually at the Hershey Car Corral.

Hershey is a must attend event. You don’t need to be a car enthusiast to put Hershey on your bucket list. Like Burning Man, it is a social phenomenon but with the added benefit of a car show on the side. 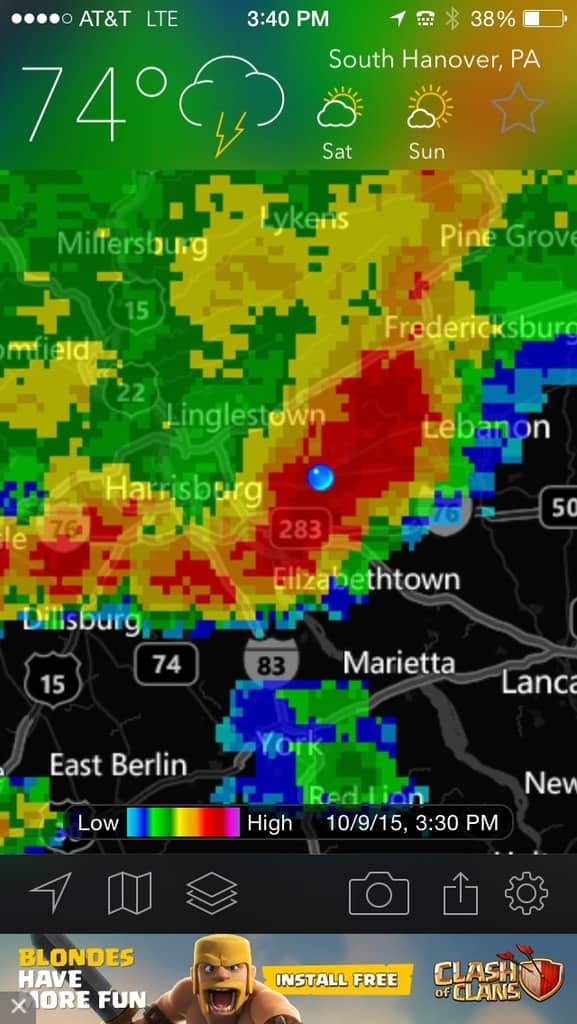 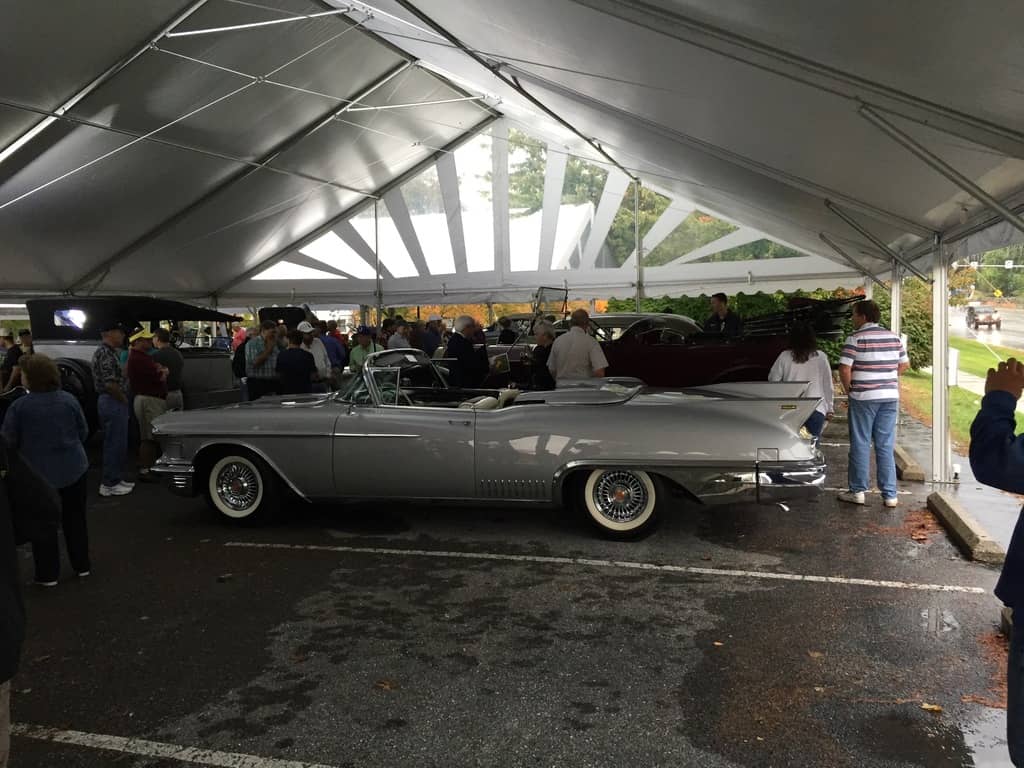 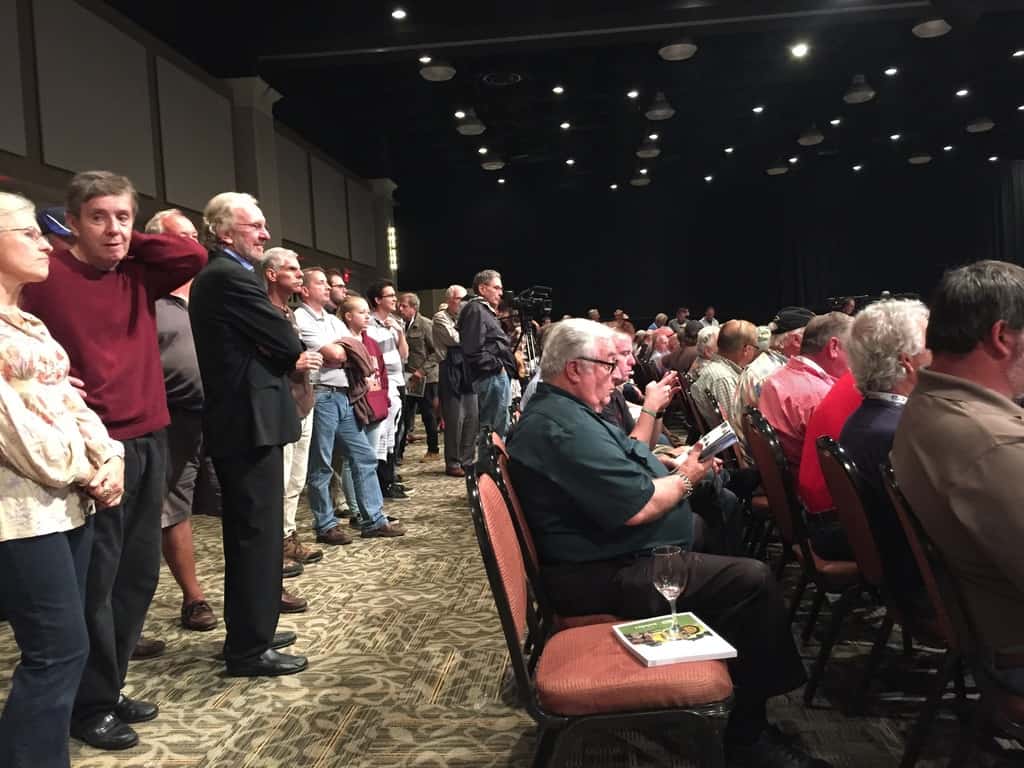 Standing room only in the Hershey Lodge ballroom 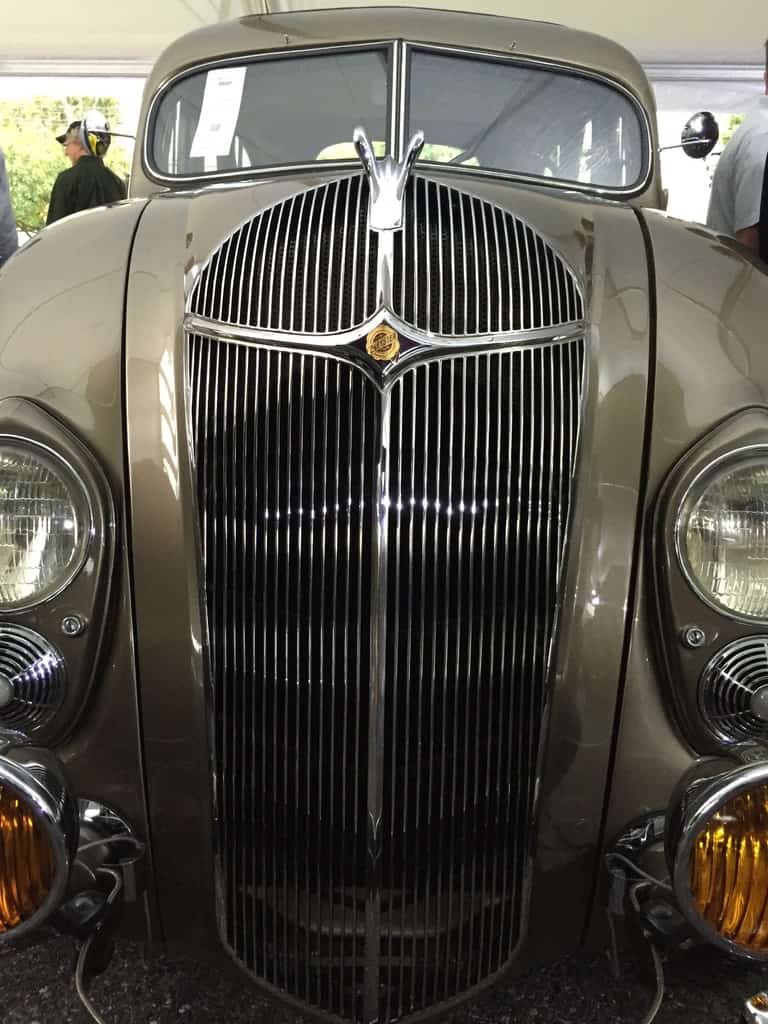 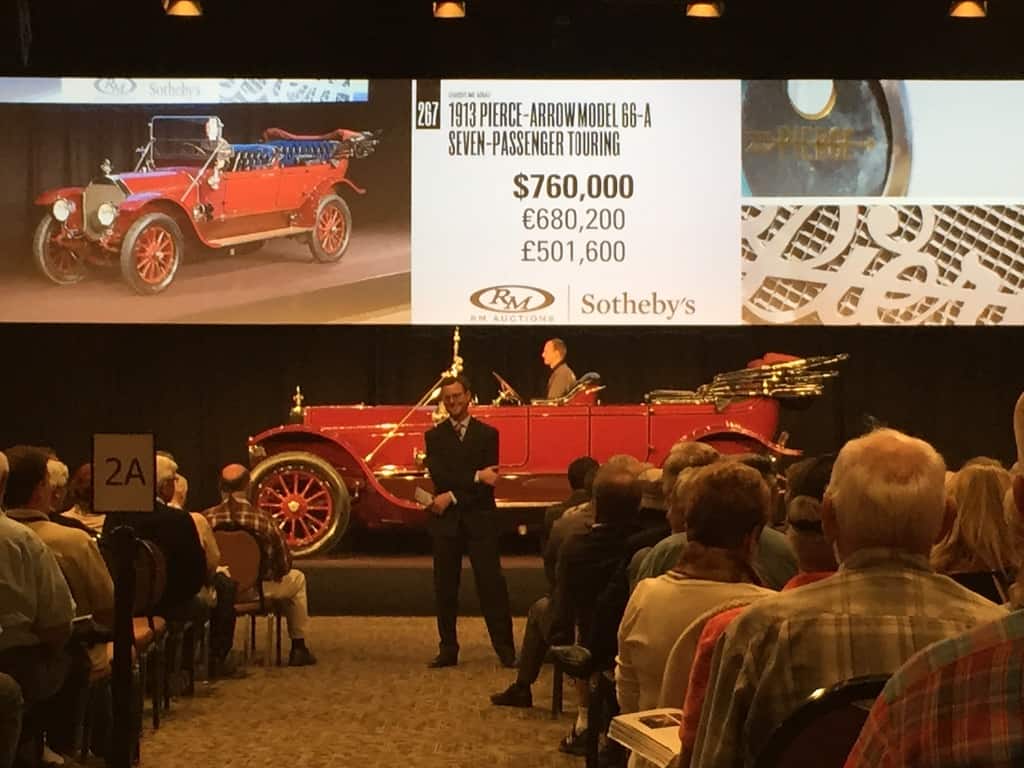 The 1913 Pierce Arrow stole the show with a hammer price of over $750,000. It was originally commissioned by a fire department. 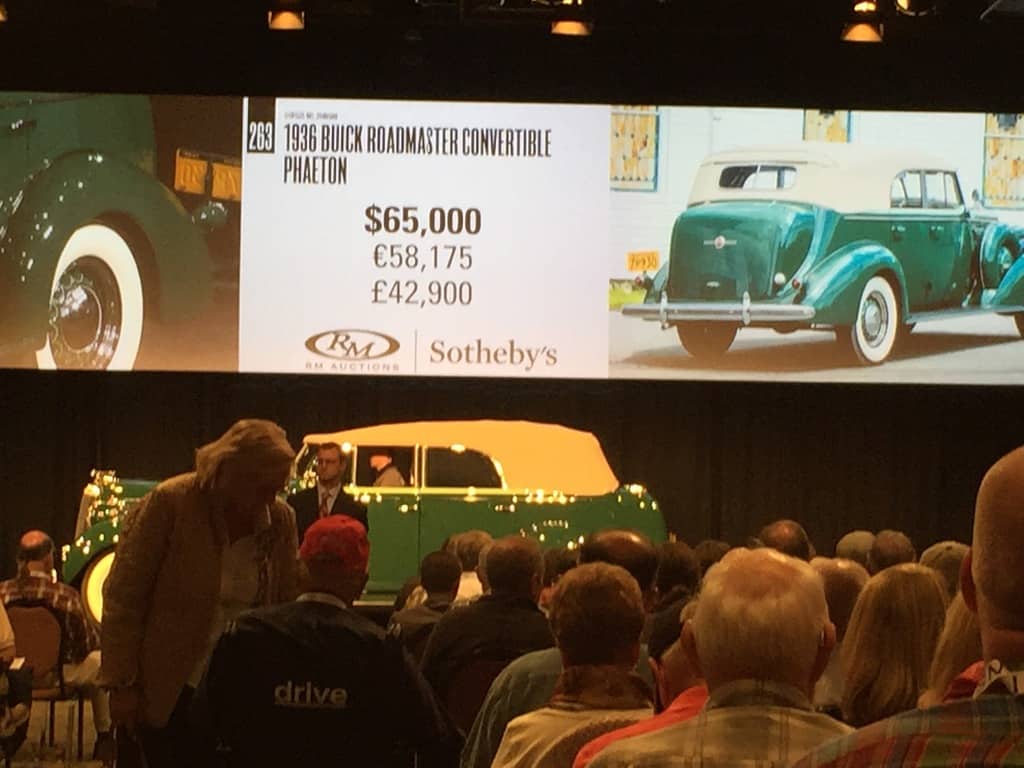 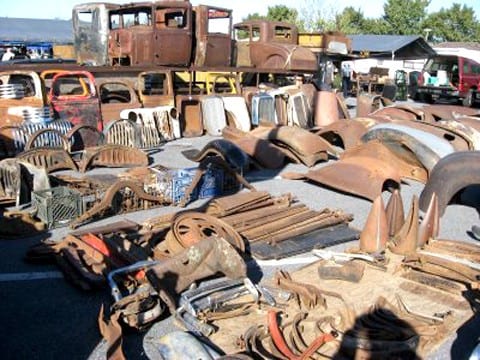 At Hershey you can find anything you need…and a lot of things you don’t need! 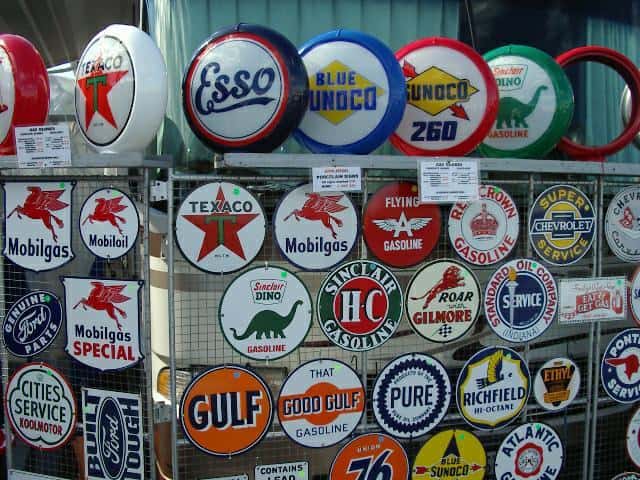 Philip Richter is President and co-founder of New-York-City-based Hollow Brook Wealth Management, LLC. The Turtle Garage Blog, he says, is dedicated to his "love of excessive personal transportation."
View all posts by Philip Richter →
Project E500 Crosses the Finish Line!
Caffeine and Carburetors and the Edison Concours d’Elegance